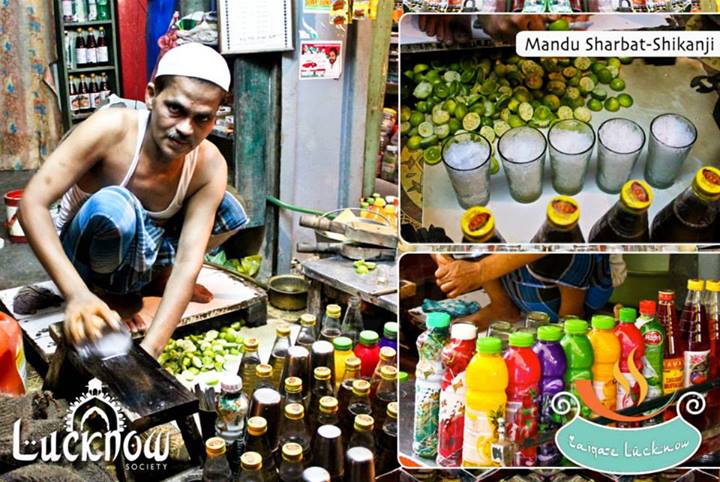 Have you tried Sharbat – Shikanji of 12 flavours like neembu, orange, mango, strawberry, pineapple, kiwi, grape, rose, khas, pudina, rooh-afza, soda ki shikanji. If not, then do visit Mandu Bhai’s shop which is more than 50 years old and started by his elder brother, late Rafi Ahmed. Shop was started with ‘baraf ka gola’ which was made of crushed ice and various syrups, it was priced at 5 paisa per gola. Now gola has been discontinued and only shikanji is served. Earlier the price of shikanji was 12 anna per glass, which is now 12 rupees per glass as the starting price. The quality and taste is maintained since decades. Pudina and neembu shikanji are the most popular flavours. Summers are obviously the peak season of these drinks. The secret recipe / masala includes saunf, zeera, ajwain, elaichi, etc which is with Mandu Bhai only as a trade secret. Ice is also one of the important ingredients of the shikanji along with neembu !

Mandu Bhai claims his shop as the most famous shikanji shop of Lucknow. He recalls an incident when a Sheikh from Saudia Arabia asked for his secret recipe / masala. He is of the opinion that “hamaari dukandaari baahar ki hai, aas-pass wale kam aate hain. Allah ki barkat hai, zyaada kamane ki zarurat nahi hai”. He is also not in favour of any franchise or extending his business, as he is very satisfied with his small shop ! Shikanji is unexpensive and refreshing chilled drink with various flavours, it is simply awesome and gives freshness in summers !