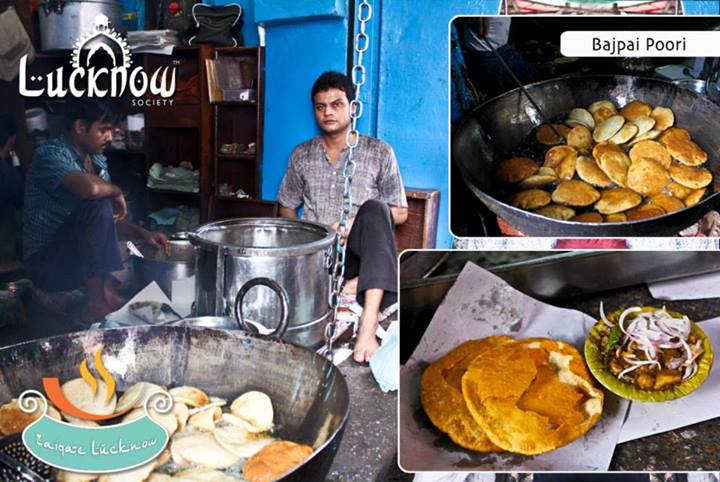 Started in 1970 by Bal Krishna Bajpai and is now managed by his son Ghanshyam Bajpai and his grandson. Bal Krishna Bajpai works previously in a chakki shop and was not comfortable with the earnings. So, he insisted with the chakki owner ( who also owned a hotel that time ) for a small place where he can start his own venture. After his repeated requests, the owner agreed to give him some space where he can start his own venture. He paid a rent of 150 rupees and started his poori-kachauri shop. Initially he sold 5poori for 1 rupee along with free sabzi. He still continues to work with those old workers for the past 40 years.

From 1970 to 2013, the quality has improved a lot. He uses homemade masala under self-supervision. His aaloo ki sabzi has a different taste and masala, all because of his efforts and his fondness for food. He also introduced rice with chhola bhatura and wada, etc. The secret recipe of poori and aaloo includes bhuna masala, garam masala, zeera, kali mirch, ghee, homemade masala, etc. First the aaloo is washed, cut and then again washed and boiled; now the masala is roasted and then the cooking starts. He tells, the reason behind the aaloo’s having the masala taste till the time of serving is that the bhuna malsala is added in the last due to which the taste of masala remains the same which is cooked in ghee. Poori are crisp and served hot, when eaten with sabzi the tastes is really awesome. ‘Apne tareeke se poori banate hai hum’ , he adds and explains that in poori the best quality atta along with few other ingredients like sauf, salt etc are used which is cooked in very hot oil and in large quantity. He serves poori with onion, chilly and pickles. One can always find a long queue infront of his shop during the day. Famous visitors of his shop are Atal Bihari Bajpai, Gulshan Kumar, Vinod Dua, etc.