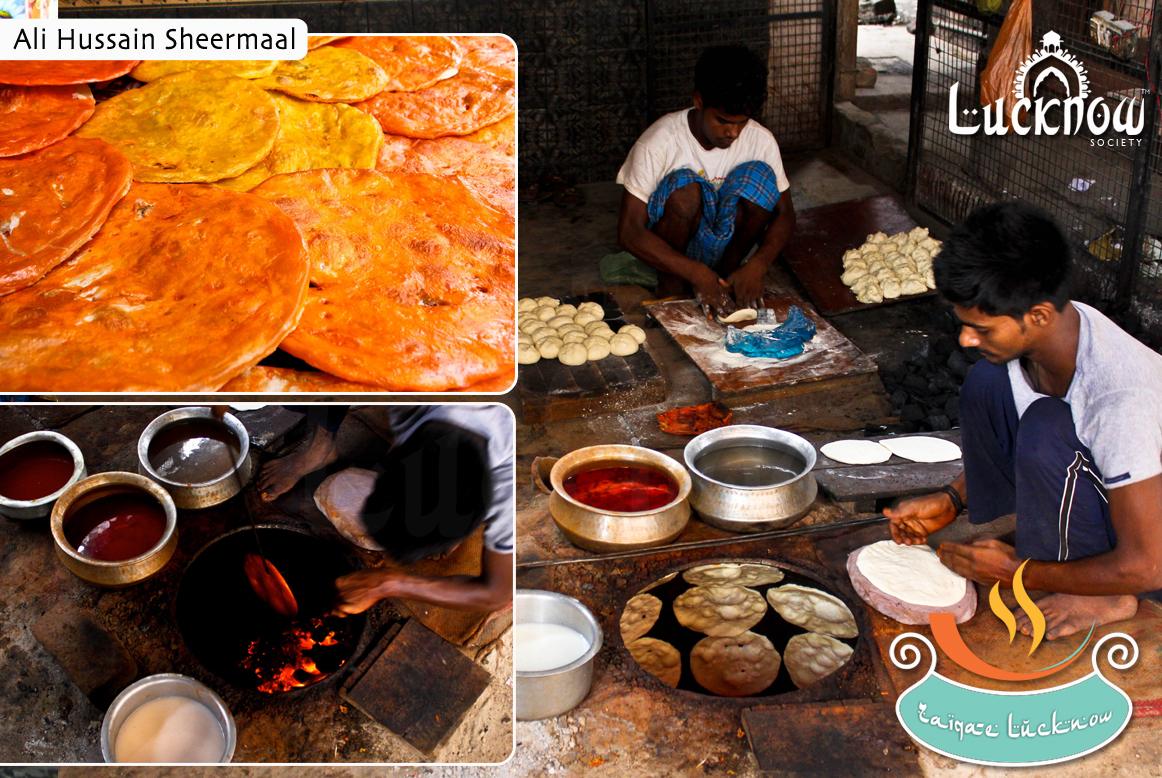 Started as Mohammadu’s Jaanashin in 1830, this is claimed to be the oldest shop of Sheermaal in Lucknow who had also invented this special type of roti. Presently it is owned by Mohammed Umar and Junaid who are the 6th generation in this profession. Workers are also attached with him since generations. This lane is known as ‘Sheermaal Wali Gali’. Specialty of the shop is Sheermaal, Baaqar Khani, Naan, Gau Zaban, in various flavours like Apple, Pineapple, Kaju, Pista, Badam & Mixed dry fruit. In earlier times , Nawab Nasir-uddin Haider asked Mohammadu to serve him a different kind of roti which the Nawab has never tasted before. Mohammadu prepared sheermaal in milk and added zafran, desi ghee and cooked it in a tandoor and served him which was highly appreciated by the Nawab. Subsequently, Nawab Saheb added this special roti ( sheermaal ) to his meal. There is always a cut on the Sheermaal, which reminds us the relation of Sheermaal with Nawab Saheb. Since then, it is a part of the cultural cuisine of Lucknow for any occasion. Around 8,000 to 10,000 sheermaals are made every day during Majlis in Muharram !

Sheermaal is a Persian word which is made up of two words; sheer ( Persian word )means milk and maal ( Arabic word ) means material. Sheermal is sweet in taste and could be of zafrani or narangi in colour as per requirement. It is cooked in lohey ka tandoor on imli ka koyla, milk is sprinkled on tandoor walls which allows the sheermaal to stick to the wall. It takes about 8-10 minutes to get completely cooked a sheermaal in tandoor. Now, sheermaal has better ingredients which includes milk, elaichi, zafran, meetha ittra, ghee and obviously some secret masala which is mixed in the flour. Speciality is this secret masala which is about 400 gm in 20 kg flour. Sheermaal is best served with kebab or qorma. Sheermaal as well as Taaftaan served as an ultimate combination with tea. Taftan has no color and it weighs bout 30 gm. The price of sheermaal depends on the quality and quantity of material used. Like sheermaal of eight rupees which weighs about 150 gm has a different taste and quality from a sheermaal which is of ten rupees and weighs 170gm (which has more of milk and elaichi ). As the price gets higher the quality and taste gets better ! Flavour, quality, customer satisfaction makes this oldest sheermaal shop still as the best shop till date. His famous sheermaal has travelled to almost all parts of the globe like Middle East, Pakistan, USA, UK, Japan, to name a few !