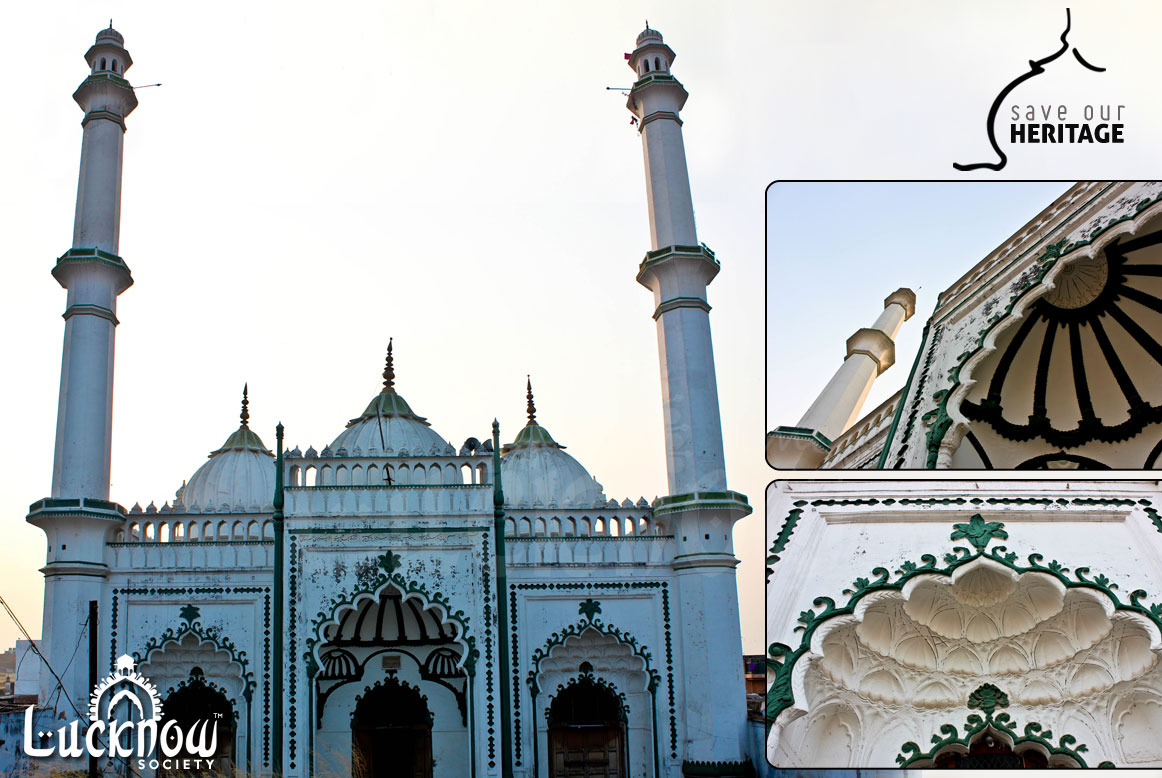 Chowk lane is famous for Tunday Kababi, Chandi Ka Warq, Phool Wali Gali, Gota, Chikan, Zardozi, Itr, much more and the historical Tehsin Ki Masjid. Constructed from the scrap obtained from the Bada Imambara, Tehsin’s mosque was built during the years 1788-1794 by Tehsin Ali Khan, who was appointed as the Daroga of Tosha Khana by Nawab Asif-ud-daula and was also known to be very close to the Nawab. The view of this mosque from a distance showcases three domes, out of which the middle one seems to be of a greater height than the ones at the extremes possessing equal height. Each of them have narrow, regular ribbings and at the peak of each dome is mounted an ornamental narrow rod which points at the sky. Built in Indo-Islamic style of architecture, the high minarets, turrets and carvings on the walls beautify the facade of the mosque. Three multi-arched gateways present at the front face of the structure lead to the interior of the mosque.

Tehsin Ali Khan was not only the Daroga of Tosha Khana but was also responsible for maintaining the valuables of the Nawab along with his royal household. ‘When the Bada Imambara was getting constructed, Tehsin went to Nawab Asif-ud-daula begging to allow him to take away all the debris which was obtained when the noblemen who did not wanted to be recognised as labourers were called after the sunset to demolish the raised structures. Nawab allowed him to haul this rubble and later with the same rubble Tehsin Ali Khan had successfully built a mosque which is now popular as Tehsin Ki Masjid or Tehsin’s mosque’, states Mr. Roshan Taqui, an eminent historian of Awadh. While offering his service to Nawab Asif-ud-daula, he became so much attached to the Nawab that on his death, he decided to quit all the earthly belongings and spend the rest of his life as a keeper at Nawab’s grave. On seeing his state, Nawab’s son Wazir Ali Khan offered him a proposal to become the Naazir of the royal palace, which Tehsin Ali khan had later accepted. But they didn’t succeed in maintaining a cordial relation for long and thus ended up parting ways. Presently, the area of the mosque is eaten up by encroachment of numerous shops and houses. Moreover, the lane in which the mosque exists is quite narrow and lies in such an interior of the area that it becomes difficult for the visitors to locate it.