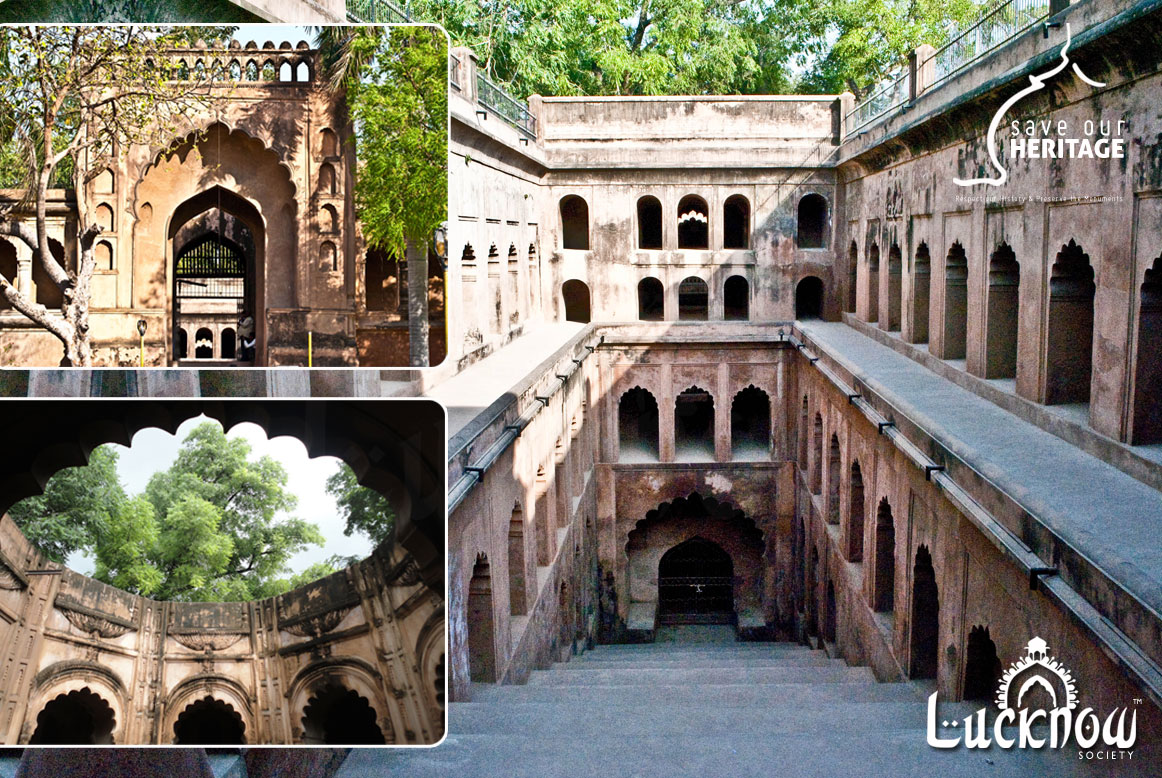 The Shahi Baoli was constructed in order to be used as a water reservoir. Myths like water of this well being connected to the river flowing nearby or a secret treasure map and the key to the treasure being thrown into this well have been quite popularly widespread. Baoli is extensively popular for it’s exceptional architectural design. Nawab Asif-ud-daula built it during the years 1784-1794 and got the design of this baoli drafted by Kifayat-ullah, who was one of the most skilful architects of those times. The exquisite Indo-Islamic architectural design of this structure makes it an impeccably unique edifice. The Shahi Baoli was built along with the other units of the Bada Imambara in order to provide food and work to the famine-stricken natives of Awadh. To the east of the main courtyard of the Bada Imambara lies the Shahi Baoli. Entrance to the Shahi Baoli is through a double arched gateway. On moving further, an open flight of stairs lead down to the step-well. Encompassing this well stands a multi-storeyed structure which comprises many open arched windows and inter-connected galleries.

The most fascinating feature of this baoli is the secret view of the visitors that it offers. Because of the alignment of one of the windows of the building and it’s entrance pathway, one can see the colorful shadow of the visitors standing at the entrance of this structure, on the water of the well. Many of the royal guests have described this building in their travelogue as a five-storeyed palace or the Panch Mahal, consisting of halls and several resting rooms for the guests. Moreover, a water supply of hot as well as cold water was available to them for bathing. The entry to this palace was from the east whereas exit to it was from the west. Three storeys of this palace are now submerged into water’, says the famous historian of Awadh, Mr. Roshan Taqui. ‘Surprised to see shadows of the visitors on the waters of the well. It’s unbelievable!’, says Anjali Tuteja, a tourist from Bangalore. Memories of visiting such architectural wonders is a treasure for lifetime. It’s a marvellous piece of work!’ says, Sandeep Rawat, an engineer. Now-a-days, the water of the well is seen covered with green algae and seems excessively filthy. People are often seen throwing coins, empty wrappers and plastic bags into the well. Even the walls of the facade sustains scribblings, patches of betel juice, cracked plasters etc.