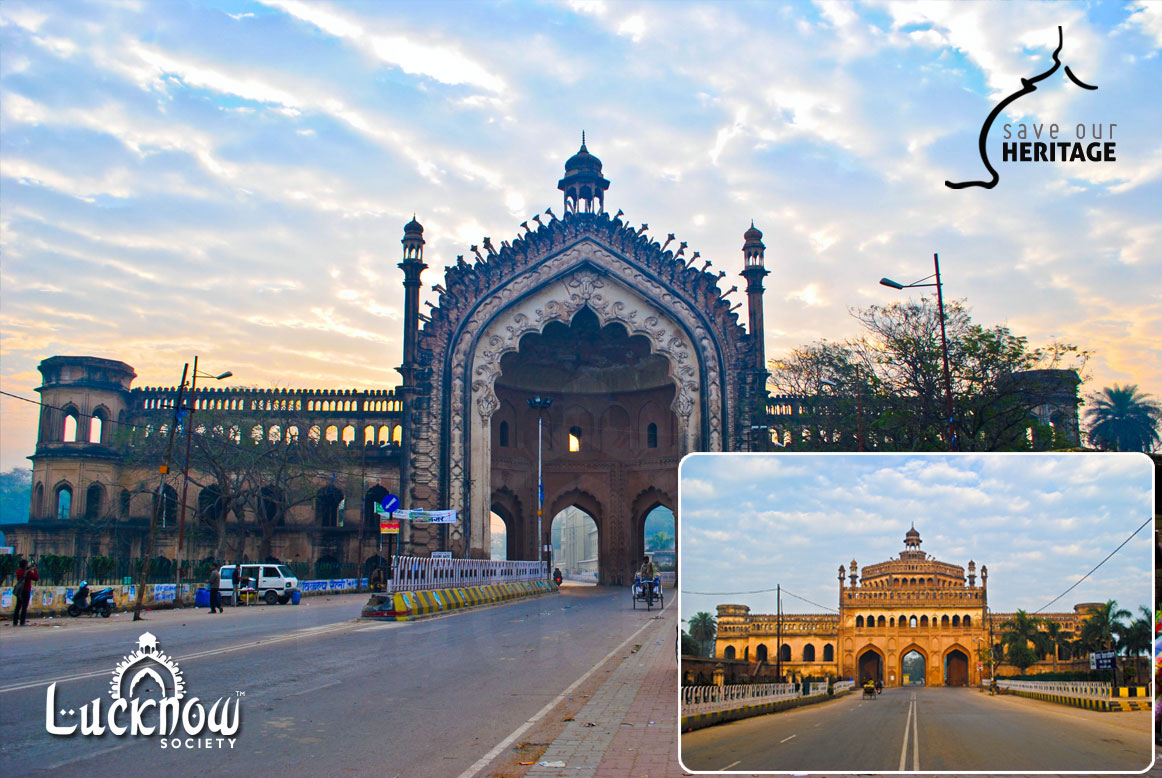 ‘Being an entrance to the city of Lucknow, Russell, the reporter of The New York Times who accompanied the victorious British army that entered Lucknow in 1858, after India’s First War of Independence, had called the stretch of road from Rumi Darwaza to Chattar Manzil the most beautiful and spectacular cityscape that he had ever seen, better than Rome, Paris, London and Constantinople.’

Built by Nawab Asif-ud-daula during the years 1784-1786, Rumi Darwaza is no less than an ornament on the streets of Lucknow. Adjacent to the Bada Imambada stands a 62 feet grand gateway built in Indo-Roman architectural style. This entranceway is so immense that it seems to be multi-storeyed from a distance. Rumi Darwaza is said to be a replica of an archway in Constantinople and is therefore, referred to as Turkish gateway. This gate further has three arched-ways on one side and a huge single arched-way on the other. A huge cupola or chhatri crowns the structure. Two slender towers are present on either sides of the gateway.

According to the great historian of Awadh, Mr. Roshan Taqui, “The spikes atop the multiple arches of the gateway signify the rising sun and the design of large petals of Lotus which according to Hindu mythology brings good fortune is used to adorn the imposing gateway.” The architectural feature that amazes its visitors is that no wood or iron was used in its construction. Moreover, this structure gives different looks when viewed from different directions. The design of this magnificent gateway was so biasing that many of the structures of those times like Jama Masjid (Lucknow), Hussainabad Imambada, Nadwat-ul-ulama and Salar Masood Ghazi’s tomb have the same design reproduced in the form of their entranceways. It was Nawab Asif-ud-daula who had got the complex of Bada Imambada (which also comprises Rumi Darwaza) built during the years 1784-1794, in order to provide food and work to the famine-stricken people of Awadh. The design of this structure was drafted by Kifayat-ullah. And with this initiative, Nawab succeeded in providing work to about 22,000 people at a time. It is said that during the daytime ordinary people used to build up this edifice while noblemen, who did not wanted to be recognised as labourers during daylight were called after the sunset to demolish the structures raised. It took them 10 years to build Bada Imambara complex and the estimated cost of the construction of this immense edifice came to Rs. 1 crore, which was a huge amount back then. The structure which is often called the face of Lucknow has suffered some cracks as its preservation is somehow being neglected. The prominent crack is at the centre of the archway. These cracks may be a result of the vibrations produced by the vehicular movement through it. Thus, this area should be declared a no-traffic zone!