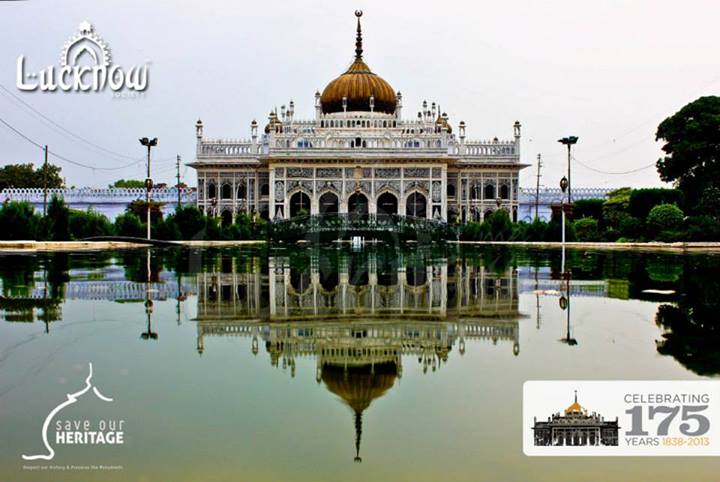 Popularly known as ‘Hussainabad Imambara’ and the ‘Palace of Lights’ for it’s splendid lightening during festivals. Chota Imambara was built by King Mohammad Ali Shah during the years 1837-1842. Constructed in a blend of Indo-Islamic, Persian and Charbagh structural design, Chota Imambara proves itself to be one of the finest example of skilled architecture of that era. It is said that Alexis Soltykoff, a Russian Prince who visited Chota Imambara in 1841, called it the ‘Kremlin of India’. This structure serves as a mausoleum for the King as well as his other family members.

Entrance to the Chota Imambara is through two successive gateways. As one surpasses the former gateway (which is three storeyed), a lightening conductor arrangement is seen in the form of two huge bronze cast figures of women (on the either sides of the gate) which are connected to spikes at the top of the gate through metal chain. Moreover, a bronze fish, which acts like a wind vane is fixed at the top of the latter gateway (which is triple arched). A water channel with a hanging bridge, having gardens on either sides, makes this edifice look even more beautiful. Chota Imambara is a complex comprising a main hall, mosque, naubat khana (where naubat or the hour of the day is announced by beating drums), hamam khana (royal bath), stable for horse and two smaller replicas of Taj Mahal. ‘Beneath one of the miniatures, lies the tomb of king’s daughter Zeenat-un Nisa, who was also known as Zeenat Aliyah. The other miniature is constructed just opposite to it as a Jawab’, states Mr. Roshan Taqui, a famous historian of Awadh.

Erected on a rectangular platform, the main hall of Imambara known as Azakhana, is a place where assembly for the mourning is held. This is the same hall which houses the tomb of the King and his mother. The splendor of gleaming gold plated domes along with various turrets and minarets makes this structure visible from a distance and thus, ends up attracting people from far off places. Chota Imambara is one of the best example of calligraphy on monument. The facade has white decorative Islamic calligraphy stroked against a black background. The hall is decorated with Belgian chandeliers, golden edged mirrors (which are said to be brought from Europe), crystal glass lamp-stands, the royal throne and the red crown of the king, silver mimbar or pulpit upon which the orator is seated when he addresses the majlis, numerous taazia made up of wax, ivory, silver and perfumed sandalwood, colorful stuccos, Quran Sharif written with the tip of a grain of rice, Quran verses written in Islamic calligraphy in the shape of tiger, horse, bird etc. are adorned in wooden frames hanging on the pillars and walls of the hall. Collection of these antique artefacts is what enhances the grandeur of this monument. ‘This hall also showcases a glass fish tank which was brought from Japan at that time and an antiquate Parisian clock which was once gifted to the king’, says Mr Tahidaar Hussain, the guide.

It is the 175th anniversary of the royal building this year. However, the structure that has aged so gracefully with time, now stands abandoned. The huge entrance gates that were once magnificent are now in dilapidated condition. Furthermore, an encroachment of numerous shops and houses has eaten up two of its verandahs. But this doesn’t mean the monument doesn’t attract tourists. People from all the corners of the world come to Lucknow to visit this fabulous edifice. ‘Historic sightseeing and to have a close look at the Islamic calligraphy is why I’m here. It’s a wonderful experience’, says Mark, a US native who is presently studying Urdu in Lucknow ! ‘Small in name but big in wonder’, says Prerna Singh, a student of Lucknow Public Collegiate.