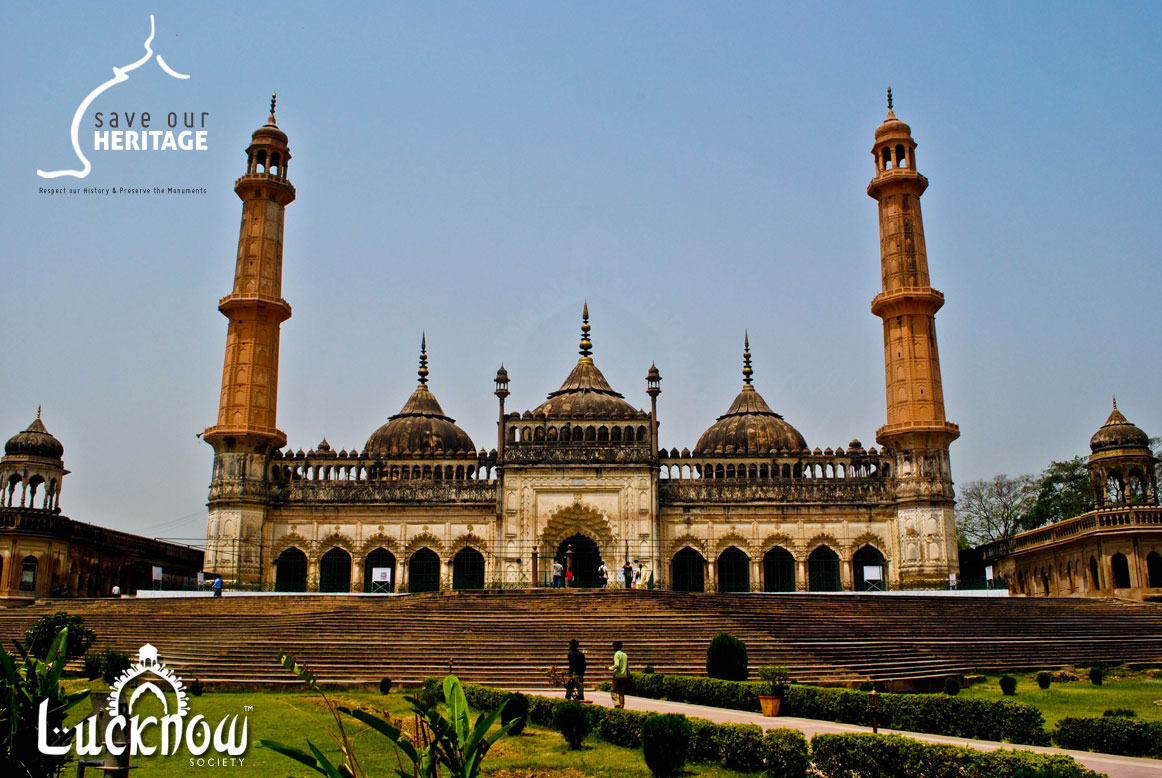 Reflecting the beauty and grandeur of an era gone by, Asifi Masjid still stands as one of the grand mosques of Lucknow. It was built by Nawab Asif-ud-daula and designed by the famous architect Kifayat-ullah. Asifi Masjid is a part of the complex of Bada Imambara and lies at the north-western side of it’s courtyard. It is elevated at a great height above ground level. A flight of around 28 stairs leads to the mosque which further comprises two grand prayer halls. Prayers are offered here on Fridays as well as on festivals like Eid. These halls have eleven arched-doorways at the front face of the building, where the one at the centre is larger than the rest. The huge minarets and domes of the facade, add stars to the grandness of this mosque. Asifi Masjid is constructed on column and arch foundation. The staircase that we see now was not built at the time of the construction of this mosque but later, by the Britishers when they had captured the complex during the mutiny of sepoys. Initially, this mosque had rooms beneath it, along with the staircase in it’s interior, which lead to the upper floor of the facade. During the revolt of 1857, freedom fighters used the same rooms for hiding their arms and ammunitions but it was later when the Britishers came to know about it and decided to shut them permanently. ‘During the years 1857-1895, the whole complex of Bada Imambara was confiscated by the Britishers. But it was finally declared as the Government’s property in the year 1895 by the Britishers’, states Mr. Roshan Taqui, a prominent historian of Awadh.

Asifi Masjid is renowned for it’s structural strength till date. Years back when the entire complex was seized by the Britishers, they tried to collapse it by building a water channel adjacent to the west wall of the mosque and slowly draining it’s water deeply into it’s foundation. But the sturdy structure didn’t collapse and thus, all their efforts went in vain. Moreover, huge mortars and guns were also dragged on it’s floors during the mutiny of 1857. It was built along with the other units of the Bada Imambara in order to provide food and work to the famine-stricken natives of Awadh. The construction work of the mosque was completed in the year 1794. The ultimate beauty of the mosque with Indo-Islamic structural design with domes and huge minarets has never failed to bias it’s visitors. ‘It’s a magnificent building with such wonderful sculptured domes and minarets’, says Ms. Kritika Kaushik, a student. ‘Such a serene place to offer prayers to the Lord! Connecting with Him becomes so easy once you are here’, says Mohd Asad, a serviceman. The present state of the mosque isn’t up-to-the-mark. The plaster of the walls of the facade is continuously shrinking and cracking. And the paint on outer face of the structure is blackening and fading with time.