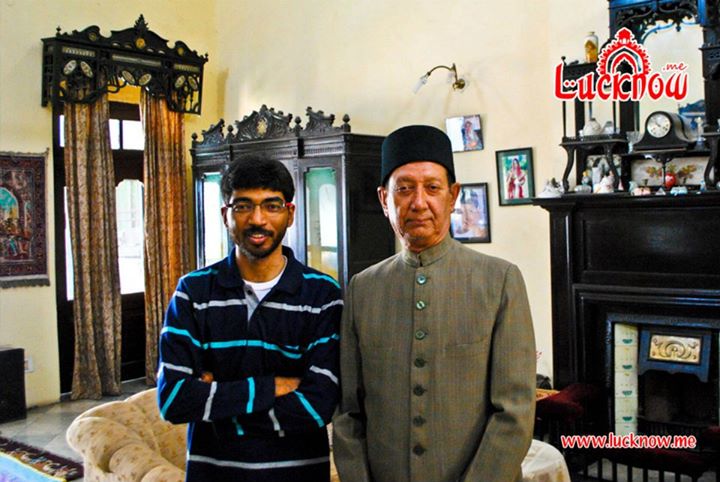 He belongs to the Royal family of Mehmudabad. His grand-father Maharaja Sir Mohammad Ali Khan was a very prominent figure in the fields of Education, Social & Political life of India, and was awarded the titles of KCSI & KCIE. He was the 1st Muslim to be honoured by the title of Maharaja. His ancestor Nasr-ullah Ist originally came to India in 12th century at the court of king Shahab-ud-din Ghauri as the ambassador of the khalifa of Baghdad. His ancestor Sheikh Nasr-ullah II became Commander of Mohammad Bin Tughlaq in 1345 and was rewarded a large Jagir in Awadh. Nawab Daud Khan granted heridetry titles of Nawab and Khan Bahadur by Akber the great as reward for winning battle against Hemu. Died in the battle field in 1569 AD. Nawab Mehmood Khan founded the town of Mehmudabad. Nawab Bazid Khan was a commander in army of emperor Jahangir received the titles of Umdatul Maali, Amir-ul-Mulk, Gazanfer-ud-Daula, MUzaffar Jung. Nawab Ali Khan was granted the titles of Raja, Muqim-ud Daulah, Qaim Jung by the King of Awadh who also played a very important role in the 1857 uprising. Amir-ud-Daula, Said-ul-Mulk, Mumtaz Jung Raja Amir Hasan Khan was his great grand father.

An alumni of Loreto Convent, Colvin Taluqdars’ College, La Martiniere College & Aligarh Muslim University; he has been educated and brought up in an atmosphere of Culture, Music, Paintings, Theatre, Literature, and is a keen preserver of the Awadhi culture; he is dedicated towards promoting the rich Cultural Heritage of Awadh, and its Ganga-Jamuni Tehzeeb !

Iqbal Manzil, his palace has the real flavour of an aristocratic architecture, photographs, paintings, artefacts, costumes, furniture and most important – memories of an era that witnessed the cultural & political activities of the British Raj & India’s Independence. This palace was host to Pandit Jawahar Lal Nehru, Pandit Govind Ballabh Pant, Hafiz Mohd Ibrahim, Rafi Ahmad Kidwai to name a few…!

Founder LUCKNOW Society had the privilege to meet him, and going through his palace, was reminded of the enchanting era of an aristocracy of the days gone by. We salute him for his courteous gentle disposition & his marvelous contribution in depicting the legacy of Awadh’s culture!