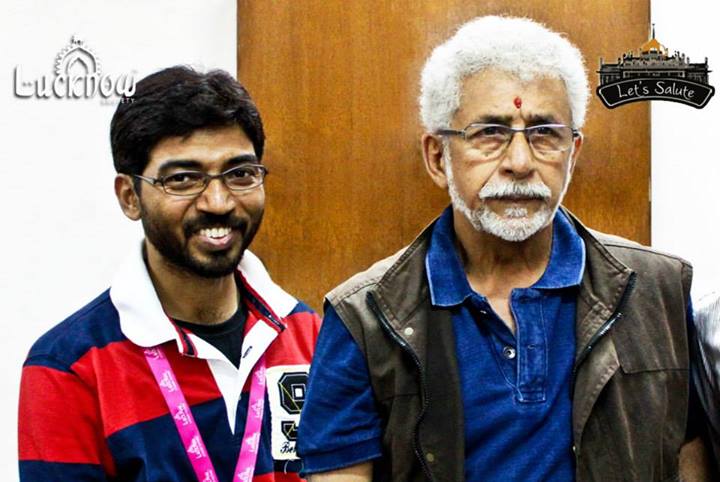 Naseeruddin Shah is widely considered to be as one of the finest Indian stage and film actor. He has been successful in mainstream Bollywood cinema as well as in Parallel Cinema. His popular films which are focused on Avadh are Umrao Jaan, Junoon, etc. and Dedh Ishqiya will be releasing soon. Born in Barabanki, UP and did his schooling at St. Anselm’s Ajmer and St Joseph’s College, Nainital. He graduated from Aligarh Muslim University in 1971 and attended National School of Drama in Delhi. His elder brother Lt. General Zameerud-din Shah recently appointed as the Vice-Chancellor of Aligarh Muslim University. In 1988, he acted in the eponymous television series based on the life and times of Mirza Ghalib, directed by Gulzar and telecasted on the Doordarshan. Naseeruddin Shah has been giving performances with his theatre troupe across globe. He has directed plays written by Ismat Chughtai, Saadat Hasan Manto, etc. With his wife Ratna Pathak, Naseeruddin Shah continues to act regularly in plays at Shashi Kapoor’s Prithvi Theatre !

He has won numerous prestigious awards in his career, including National film awards ( for films Sparsh, Paar, Iqbal ), Filmfare awards ( for films Aakrosh, Chakra, Masoom ), Volpi Cup Award for Best Actor at the Venice Film Festival for the film Paar. Sangeet Natak Akademi Award 2000, International Indian Film Academy Award for Artistic Excellence for Performance in a Negative Role for film Sarfarosh 2000, Award for contribution to Indian cinema at 7th International Film Festival of Mumbai 2004. The Government of India has honoured him with both the Padma Shri 1987 and the Padma Bhushan 2003 awards for his contributions to Indian cinema. He has been awarded the life membership of International Film And Television Club of Asian Academy of Film & Television.

He made his acting debut in Shyam Benegal’s 1975 film, Nishant. He has acted in movies such as Aakrosh, Sparsh, Mirch Masala, Albert Pinto Ko Gussa Kyon Ata Hai, Trikal, Bhavni Bhavai, Junoon, Mandi, Mohan Joshi Hazir Ho, Ardh Satya, Katha, Jaane Bhi Do Yaaro, etc. One of his most important films, Masoom (1983) was shot at St Joseph’s College, Nainital. He became active in mainstream Bollywood cinema with the 1980 film Hum Paanch. His next major success in mainstream films was the 1986 multi-starrer film Karma where he acted alongside veteran Dilip Kumar. Starring roles for films such as Ijaazat (1987), Jalwa (1988) and Hero Hiralal (1988) followed. In 1988 he played opposite his wife Ratna Pathak as Inspector Ghote, the fictional detective of H. R. F. Keating’s novels in the Merchant-Ivory English language film The Perfect Murder. He has acted in several multi-starrer Bollywood films as well, such as Ghulami (1985), Tridev (1989) and Vishwatma (1992). In 1994, he acted as the villain in Mohra, his 100th film as an actor. He forayed into Malayalam cinema the same year, through T. V. Chandran’s critically well acclaimed drama Ponthan Mada. The film portrayed the irrational bonding of a feudal serf (played byMammootty) and a colonial landlord (played by Shah). He strongly believed that the distinction between art and commercial films had largely reduced, especially with the directors of the former also making commercial films. In 2000 his dream of playing Mahatma Gandhi was realised when he played Gandhi in Kamal Hassan’s critically acclaimed Hey Ram which focused on the assassination of Gandhi from the assailant’s point of view. He won a lot of critical acclaim by playing the role of Mohit, the drunken coach to a deaf and mute boy in Iqbal, which was written by Vipul K Rawal with Shah specially in mind. Shah acted superbly as Gulfam Hassan, a Ghazal singer cum terrorist mastermind, in the 1999 Aamir Khan starrer Sarfarosh. He also worked brilliantly in Neeraj Pandey’s critically acclaimed A Wednesday. He was recently seen in Chamatkar, Kabhi Haa Kabhi Naa, Peepli Live, Ishqiya, 7 Khoon Maaf, Zindagi Na Milegi Dobara, The Dirty Picture, etc. He also starred in international projects such as Monsoon Wedding in 2001 and a Hollywood comic book adaptation The League of Extraordinary Gentlemen in 2003 (co-starring Sean Connery) where he played the role of Captain Nemo. His portrayal of Nemo was very close to the design of the graphic novel, although his Nemo was far less manic. He worked in an Indian adaptation of Shakespeare’s Macbeth, titled Maqbool and Rajiv Rai’s Asambhav opposite Arjun Rampal and Priyanka Chopra in 2004. He then went on to work in The Great New Wonderful (2005). Shah’s upcoming films include The Hunt where he plays a recluse growing marijuana in his forest retreat. He made his Pakistani film debut in Khuda Ke Liye by Shoaib Mansoor where he played a short cameo. His directorial debut in movies, Yun Hota To Kya Hota, was released in 2006. It stars several established actors such as Konkona Sen Sharma, Paresh Rawal, Irfan Khan, newcomer Ayesha Takia, his son Imaad Shah and his old friend Ravi Baswani.

In 1977, he, Tom Alter and Benjamin Gilani formed a theatre group called Motley Productions. Their first play was Samuel Beckett’s Waiting for Godot, which was staged at the Prithvi Theatre on 29 July 1979. In 1988, he acted in the eponymous television series based on the life and times of Mirza Ghalib, directed by Gulzar and telecast on DD National. In 1989, he acted as the Maratha King Shivaji in another eponymous television series Bharat Ek Khoj based on Jawaharlal Nehru’s book The Discovery of India. In 1999, he acted as a special agent in the TV series Tarkash on Zee TV. He played the role of a retired agent haunted by nightmares who is re-inducted as he apparently knows something about a dreaded terrorist somehow connected with his past. In 1998, he played the role of Mahatma Gandhi in the play Mahatma Vs. Gandhi, (which looked at the Mahatma’s relation with Harilal Gandhi, his first son). With this, he achieved his objective of portraying Mahatma Gandhi, a role he had auditioned for in Richard Attenborough’s Gandhi. In 2000, he again portrayed the Mahatma, this time on film, in Hey Ram. He played the villain with the dual identity of a ghazal singer and a Pakistani spy who supports terrorism in India in Sarfarosh (1999). He played the role of Mohit, a drunken coach, in the critically acclaimed Iqbal. The role was specially written keeping him in mind by Vipul K Rawal, the writer of the film. It was recently voted as one of ten Hindi films that is considered ideal training and motivational material. He was the first of several celebrity actors, who played the role of narrator in the popular audio book series for kids Karadi Tales. He was the narrator in the film Paheli, the Indian entry to the 2006 Academy Awards.

Founder LUCKNOW Society interacted with him recently at our own ‘Lucknow Literary Festival’, where he was the special guest and attended the session on Wajid Ali Shah. We Salute Naseeruddin Shah for being the icon of Avadh in theatre and cinema. His contribution and commitment to the cause of theatre and cinema are outstanding. We are looking forward for his participation in ‘Lucknow Literary Festival’as well as in ‘Lucknow Film Festival’ and wishing him very best for his career !