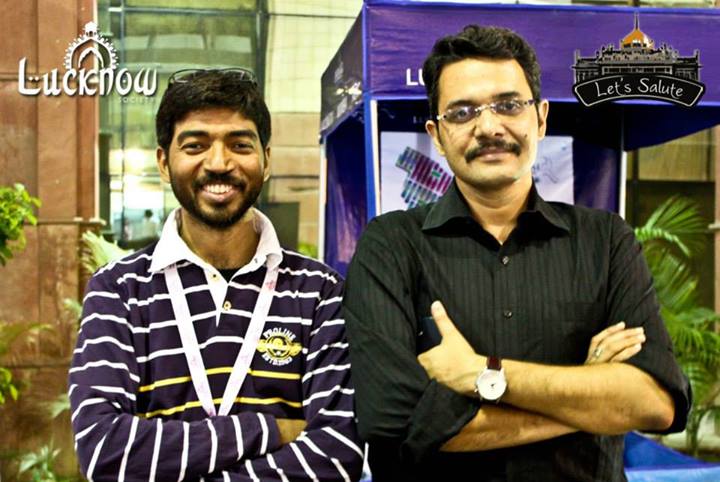 Neelesh Misra is a proud name for Lucknow as he is from the city and did his schooling from Mahanagar Boys Inter College. He occupies a unique space on the Indian creative landscape, probably the only creative professional to work across so many diverse genres. He writes Bollywood lyrics and scripts, narrates stories every night on radio to a nationwide audience of 31 million people, is an award-winning journalist who now runs India’s first professionally run rural newspaper, Gaon Connection and has written five books and edited two.

As a script writer, he wrote the script for ‘Ek Tha Tiger’, a Salman Khan starrer. At present, he is immersed in writing a couple of other scripts for undisclosed romantic and thriller movies. As a lyricist, he has given great hit songs to Bollywood. He has, so far, penned the lyrics for over 30 Bollywood songs. The first lyric he wrote was for Mahesh Bhatt’s film Jism in 2003. This was right after he met him while researching on one of the books he was writing at that time. Some of his most popular songs are Jaadu Hai Nasha Hai ( Jism ), Chalo Tumko Lekar Chalein ( Jism ), Bepanah Pyaar hai (Krishna Cottage ), Maine Dil Se Kaha ( Rog ), Khoobsoorat Hai Vo Itna ( Rog ), Guzar Na Jaaye ( Rog ), Kya Mujhe Pyaar Hai ( Woh Lamhe ), Lamha Lamha ( Gangster ), Khwahishon Se ( Holiday ), Tu Hai Bhatakta Jugnu Koi ( Holiday ), Neele Neele Aasmaa Taley ( Holiday ), Bolo Na Tum Zara ( Fight Club ), Gulon Mein Rang Bhare – Sikandar (Tribute to Faiz Ahmed Faiz), I am in love ( Once Upon A Time In Mumbai ), Anjaana Anjaani ki Kahani ( Anjaana Anjaani ), Abhi Kuch Dinon Se ( Dil Toh Baccha Hai Ji ), Ye Dil Hai Nakhrewala (Dil Toh Baccha Hai Ji ), Humko Pyaar Hua ( Ready ), I Love You ( Bodyguard ), Dil Mera Muft Ka ( Agent Vinod ), Khudaaya ( Shanghai ), Banjaara ( Ek Tha Tiger ), Kyon ( Barfi ). However his personal favorite songs are Maine Dil Se Kaha of Rog and Kyon from Barfi.
As an author, he has written five books : 173 Hours in captivity – The Hijacking of IC-814, End of the Line – The Story of The Killing of the Royals in Nepal, Once Upon a Timezone, The Absent State and Neelesh Misra ka Yaad Sheher, Volumes 1 and 2. He also edited the following books, India Yatra & Inspired India – Ideas to Transform a Nation, Dream Chasing – One Man’s Remarkable True Life Story. As a radio storyteller, his show Yaadon Ka Idiot Box with Neelesh Misra on 92.7 BIG FM has been a huge successs. In this show, he tells stories of Yaad Sheher, an imaginary city that he has created. This show is broadcasted in 35 cities across the nation.

As a journalist, Neelesh Misra has covered conflict and insurgency over the past two decades in South Asia, travelling deep into the hinterland. His travels have taken him from the rebel heartlands of Kashmir to Naxalite-dominated areas of central and eastern India, to the faraway north-east which is home to some of the world’s longest running insurgencies. He has closely studied the Maoist insurgency in Nepal. For his reportage from India’s insurgency lands, he received the Ramnath Goenka Award For Excellence In Journalism and the K.C. Kulish Memorial Award in the year 2009. He moved on to pursue his love for writing and creating content that connects him with more and more people by means of books, stories, songs, scripts and his voice. As a social entrepreneur, he has started India’s first rural newspaper Gaon Connection. Neelesh Misra is the Founder & Editorial Director of the newspaper. This project has been a great success so far. He has also founded a content creation company and the the idea is to have a team of talented and creative people who would work together to create content across media verticals.

Founder LUCKNOW Society interacted with him recently at our own ‘Lucknow Literary Festival’, where his book Neelesh Misra Ka Yaad Sheher was launched and it was followed by his wonderful musical performance. We Salute Neelesh Misra for being the icon of youth and an inspiration for this generation. Sky is the limit for any creative mind and Neelesh Misra is one such example. We are looking forward for his next visit and wishing him very best for his career !