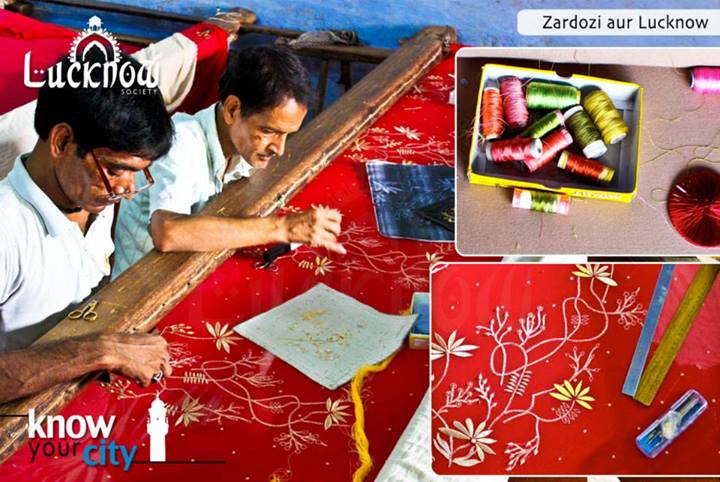 The word ‘zardozi’ has been derived from Persian language, where ‘zar’ means gold while ‘dozi’ means embroidery. It is basically an elaborate style of hand embroidery popular in Indian subcontinent. This art was brought in India during the 12th century and was made popular through Mughal patronage. It was during Aurangzeb’s reign when the art spread to other parts of the country wherein Lucknow became a major centre. Since then Zardozi has remained Lucknow’s imperial art. The zardozi work in Lucknow can be attributed to delicate intricacy, elegance and inherent beauty, all emerging from the zeal of the local artisans. The original zardozi embroidery was done using silver and gold threads and was known as ‘kalabatun’. An evolved version of zardozi combined with ‘dabka’ work is said to have emerged in Lucknow. There are numerous materials that a karigar would use to complete a fine piece. Stretching from salma (gold wires), sitara (sequence), beads, precious and semi precious stones, silk threads; they all enhance to the arty denouement of zardozi. With the rise in prices of gold and silver the trend has shifted to the usage of synthetic threads. Zardozi work is expensive owing to the use of expensive materials and also because the embroidery takes hours to complete. In recent times zardozi has paved its way in accessories like bangles, headpieces and even shoe pieces.

It is estimated by the Textile Ministry that there are more than 10,000 micro and small enterprises which are involved in making zardozi products in this region. Anwar Nawab Zari Wala located in the Darulshafa area in chowk is an specialist in this field and here you will find number of artisans sitting around ‘adda’ working on their respective pieces of cloth. He is also expert in preserving the old work to a new life ! The world renowned Lucknow Zardozi has recently been accorded the Geographical Indication (GI) under the Geographical Indication Registry (GIR). Lucknow still remains among the oldest and finest centres for zardozi !