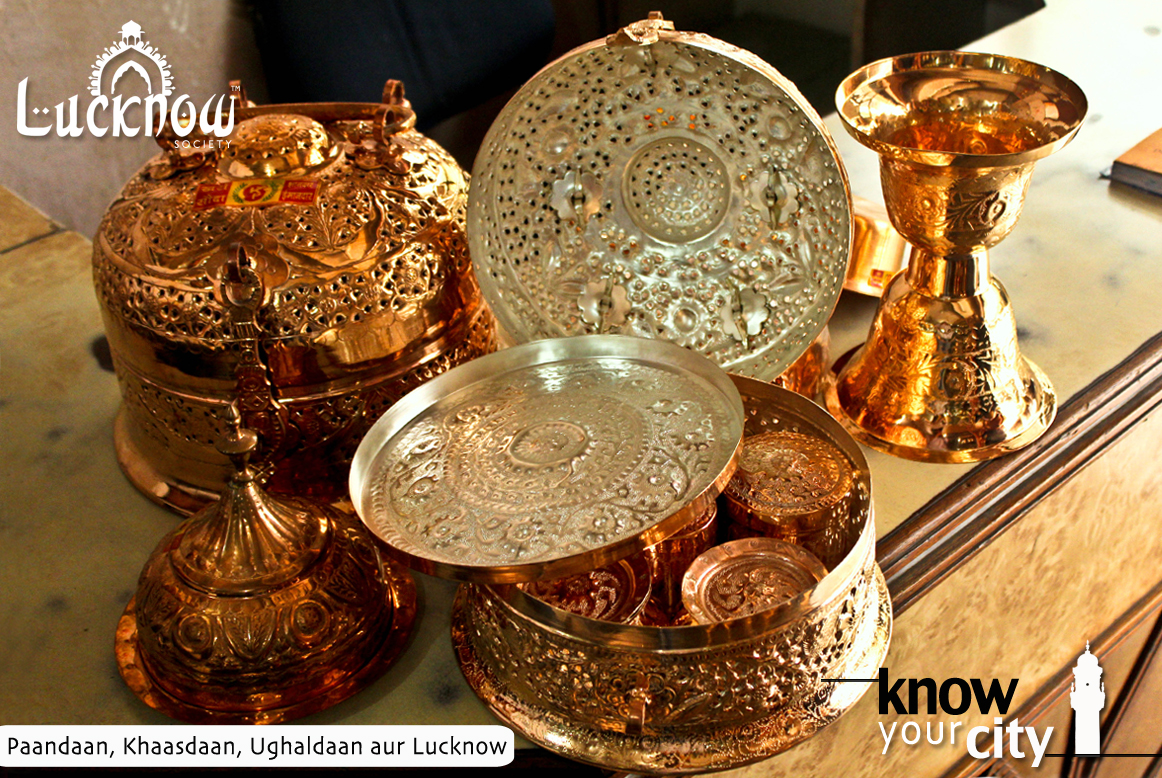 As rightly mentioned by Abdul Halim Sharar in his legendary book Guzishta Lucknow; it was the court of Lucknow, above all others that the late Mughal civilisation reached zenith of its splendour and sophistication. The high culture of Lucknow which was flowering from the 18th century until today can be seen in various art forms present in the city. Paandaan, Khaasdaan and Ughaldaan display the perfect picture of ‘Lucknawi Ethnicity’. The idea of ‘paandaan’ or betel box which turns raw betel leaf into a thing of glory called ‘paan’ is one of a kind. Paandaan is basically a box with divisions which is used to keep essentials for making a pan. The idea of paandaan was brought in Lucknow from Delhi in past, and modifications were made here which are followed till date. In the box there are two big metal cups to contain ‘kathha’ and ‘chuna’ and three to four smaller, equal sized receptacles. All of these are arranged in a circle or rectangular shape and in middle is a small container to hold cardamoms or cloves, the number of cups and shapes may vary as per designs. Paandaans made in Lucknow are often referred to as the most sophisticated for its design and shape. In the course of time, the handy betel box also came to serve as treasure boxes for ladies. The size of paandaan began to increase until it came to weigh as much as 40 kgs !

In addition to paandaan was the ‘khaasdaan’, the betel case, in which the prepared paan is served in formal gatherings and in daily life. Khaasdaan is simply a tray covered with beautiful and designer lid. The idea of presenting paan in khaasdaan in itself portrays the ‘nawabi culture’ of the city. There are variations in khaasdaan pertaining to different sizes and designs. Lastly, the ‘ughaldaan’ or the spitting vessel completes the whole process of paan eating. Ughaldaan is a broad vessel where you can spit the collected saliva of pan called the ‘peek’. The use of ughaldaan presents the idea of a mannerly disposal of peek rather throwing it anywhere like today. It is believed that no marriage is complete without the gifting of paandaan and khaasdaan. It is this practice which is keeping the art and tradition alive. One of the oldest shop in Lucknow where you would find finest piece of paandaan, khaasdaan and ughaldaan is Kanhaiya Lal Prag Das in the Yahiyaganj area. The production of paandaan,khaasdaan and ughaldaan also boosts many similar profession like ‘kalai coating’. Due to lack of demand and non participation of people, this art is facing slow decay with merely countable centres for production of paandaan, khaasdaan, ughaldaan and kalai coating.