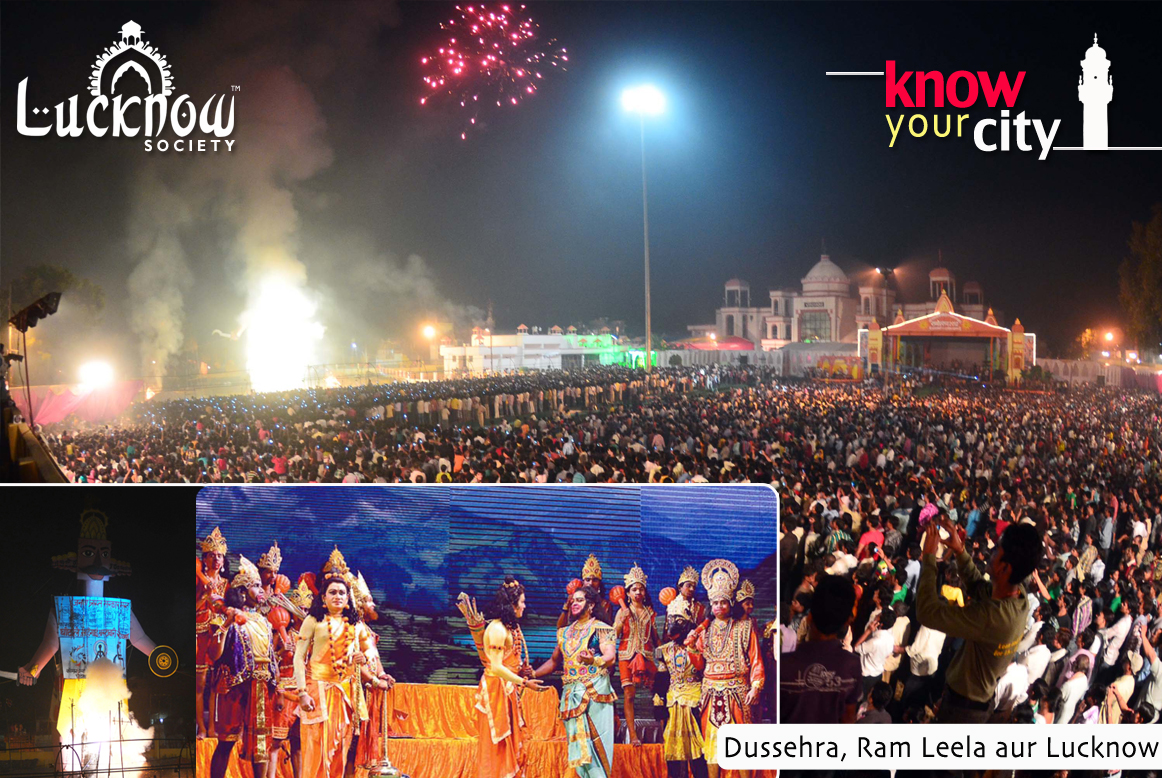 Dussehra is one of the main festival celebrated all over India. Dussehra which is also known as Vijay Dashmi is the last day of Navratri. It is one of many festivals in India depicting victory of good over evil. In Lucknow the essence of celebrating Dussehra is very different due to its Ganga-Jamuni Tehzeeb. It is celebrated across the city and by people of every religion. The Nawabs used to participate freely in festivals of all religions. It started in reign of Nawab Sadat Ali Khan and there were numerous instances recorded in King Muhammad Ali Shah’s himself participating in the Dussehra and Wajid Ali Shah was also very active in participation. It is said that Mahant Rama Lal Saran was held in great esteem by the Kings of Awadh, and had started the celebration of the Ram Leela festival during the Dussehra at Aishbagh, Lucknow. One of the oldest Ram Leela in Lucknow is done currently in Mausamganj by Munshi Shekhawat Ali and Bhuvan Chaudhary. It is believed that Ram Leela in Mausamganj is 134 years old !

Dussehra in Lucknow is preceded by long event of Ram Leela which is basically depiction of story of Ram in a theatrical manner. Ram Leela is enacted in various parts of Lucknow. It is presented over ten days ending up in a battle between Ram and Ravana and ultimately death of Ravana, as mentioned in Ramayana. The final day of Ram Leela is the burning of edifice of Ravana signifying victory of Lord Ram. The Ramlila ground in Aishbagh presents one of the best celebrations of Dussehra organised by Shri Ram Leela Samiti. On the Ram Leela ground Aishabagh after the burning effigies of Ravana along with his brother Kumbhkaran and his son Meghnath, it is followed by grand fireworks around the place. It is one magnificent sight that everyone in the city should experience. In many other parts of the city, the period of Dussehra and Ram Leela is celebrated as Durga Puja. The city is also home to many old Durga Pujas like one in Bengali Club, Shashi Bhushan and Ram Krishna Math. It is undoubtedly true that Lucknow is a city of diversity. All festivals in Lucknow are celebrated with equal enthusiasm and joy!