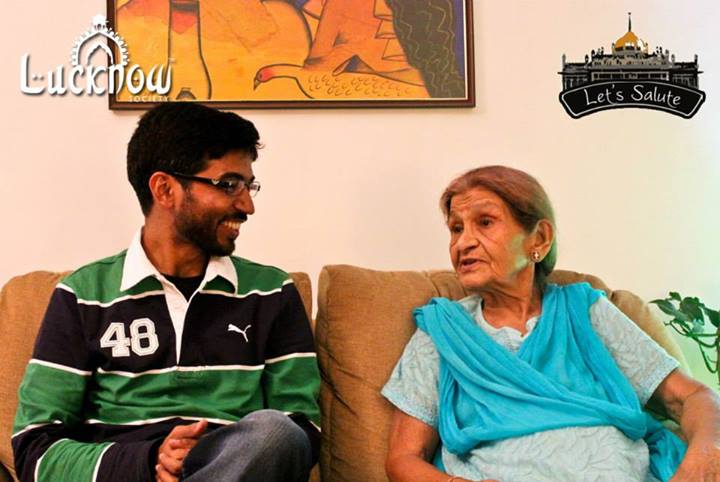 “Aap ab suniye all india radio ka panchrangi program akashwani”…. These were the opening words in 1963 by the first announcer Mrs Farrukh Jaffar when Akashvani went on air in Lucknow ! She is a treasure of memories related to drama, radio and films related to Lucknow. Her recent performance in Peepli Live as Amma is so appreciated by people that she is now referred as ‘Amma’ a true salute to an artist !

Born in a family of feudal lords, or zamindars from a village in district Jaunpur. She was married to Syed Muhammad Jaffar, freedom fighter, eminent journalist and later Congress Party Member of the Legislative Council (MLC), UP. Ever since her marriage, Farrukh has lived in Lucknow. She graduated from the Lucknow University and took up job as announcer at the All India Radio, where she wrote plays for the radio and enacted roles on air in popular narrations called Geeton Bhari Kahani that were a combination of fiction and film songs. For a few years she lived with her family in Delhi when her husband was India correspondent of the Chicago Daily News and The Washington Post. Her love for drama and films that began at the Lucknow radio station, flowered in Delhi. Farrukh joined the Vividh Bharti at Delhi’s All India Radio (AIR) and later moved to the Urdu Services of the same broadcasting house. After work she attended workshops held by Ebrahim Alkazi, the most famous director of Delhi’s National School of Drama (NSD) and one of the most influential stage director and drama teachers of 20th century Indian theatre. Under Alkazi’s direction, Farrukh played the role of the mother in the Urdu translation of Luigi Pirandello’s Italian play called Six Characters in Search of an Author, in 1968.

Back in Lucknow, Farrukh’s first foray on the silver screen came with Muzaffar Ali’s Umrao Jaan where she acted as the mother of Rekha and later she acted in a series of films made by Muzaffar Ali for television like Shawl. She has played in award winning mainstream films like Swades with Shahrukh Khan, in Aamir Khan’s Peepli Live, Prakash Jha’s Chakravyuh and the Kangana Ranaut starrer Tannu weds Mannu. Amma ki Boli and Barefoot to Goa starring Farrukh are two films that await release any day. Farrukh has just completed shooting for Anwar Ka Ajab Qissa by eminent poet, essayist, novelist and film maker Buddhadeb Dasgupta with actor Nawazuddin Siddiqui of Kahaani, Taalash, Chittagong and Gangs of Wasseypur fame. One of the most memorable characters of Peepli Live, Amma, is what she is better known as now. Most of the dialogues of her were extempore in the movie ! Today, Farrukh Jaffar, is over the moon as she watches her character in the film become a household name. She is on such a high that she no longer rebukes clerks at the bank who make her walk from pillar to post without explaining why her widow’s pension is not transferred to her account for more than half a year.

She is remembered within the family as a restless soul from a feudal background. Obviously attracted to creative activities like theatre and films from very early in life, she also had to battle Victorian values which dictated that this entertainment was not for people from respectable families. Caught between the sorrow of watching her lifestyle as the daughter of affluent landlords collapse before her and the joy of coming of age in a modern post-independent India, being wife and mother was never the cup of tea for this housewife. The kitchen could not confine her. She was always on the move, always on the go. Sometimes she was at the university, other times at the National School of Drama (NSD) and most of the time at the All India Radio (AIR). Even when she was at home, she did things that would never occur to other women of the family.

Founder LUCKNOW Society met the legend recently and was inspired by the energy and passion of Amma. Mrs Farrukh Jaffar is an artist par excellence and true representative of Lucknow and its heritage. We Salute her for being a shining star and completing 50 glorious years dedicated to Lucknow. Wishing her very best for her health & upcoming ventures !