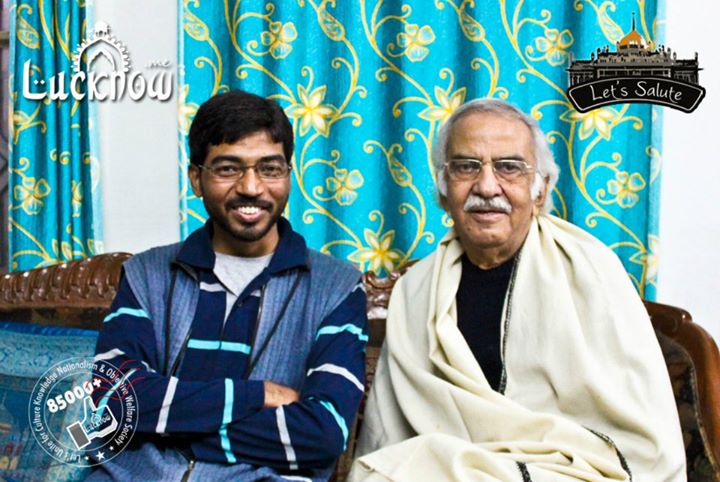 Lucknow based Mr Anwar Nadeem is an acclaimed Urdu poet, writer, satirist, humorist, critic, dramatist, journalist, theatre and film actor, short-story writer and feature film / television / drama serial screenplay writer – all rolled into one. He relishes the essence of Lucknow’s charm which the world appreciates ! This very impeccable Luckhnawi-Lehja caught the attention of director J P Dutta, who was on the lookout for someone who could speak refined Urdu, to fit into the role of Mirza Hadi Ruswa ( the author of the famous novel, Umrao Jaan Ada ), in his film Umrao Jaan, starring Abhishek Bachchan and Aishwarya Rai. Anwar Nadeem not only plays the author who originally penned the classic tale of a famous courtesan from Lucknow, but also ended up doing the narration for the celluloid version of the novel .

Mr Anwar Nadeem may be legatee of a rich tradition, but saying yes to convention is something he has never learnt. Manju Nishaan, a modest and dignified house in one of the city’s remotest colonies, Kalyanpur off Ring Road, reminds Shaam-e-Awadh, a tradition increasingly being relegated to the realms of fable. He writes about himself that there was always experiment with his name ; ‘Anwar’ was his name, which was changed to ‘Anwar Kamal Khan’ in school, later ‘Aafreedi’ was also added in the same, ‘Anwar Nadeem’ was his pen name and finally it is ‘Anwar Nadeem Qaiser-bari’. At Manju Nishaan lives Mr Anwar Kamal Khan Aafreedi, who greets everyone in inimitable style and makes you lose the flux of time through his couplets delivered in deep baritone. In his mid 70s, Mr Anwar Nadeem (Aafreedi’s nom de plume) is a legend, with more than 13 books ( like Safarnama – Urdu shairi, Jalte Tave Ki Muskurahat – Urdu reportage, Kirchein – Urdu film script, Jai Shri Raam – Urdu & Hindi nazmein, Maidan – Urdu ghazlein, Pani – Hindi ghazlein, etc ) and a record number of mushaira reportages to his credit. His award winning collection of reportages, Jalte Tave ki Muskurahat is a rich repository of contemporary poetic traditions and styles. It is priceless for its timeless worth. Born in one of Malihabad’s biggest landowning families (the ancestral house, Bada Mahal, incidentally formed the sets of the Shyam Benegal film Junoon), Nadeem is the inheritor of the literary traditions of his forefathers (his great-grandfather was Wasl Malihabadi and grandfather Lutf Malihabadi – both eminent Urdu poets. The great Josh Malihabadi was a first cousin of Nadeem’s maternal grandmother) and the sensibilities of his father (Khan Saheb Abdul Bari Khan, a prominent horticulturalist and one of the founders of the Sikandar Bagh Botanical Gardens). Mr Anwar Nadeem books have won rave reviews along with a number of prestigious awards like Uttar Pradesh Urdu Academy Award, Bihar Urdu Academy Award, Fakhruddin Ali Ahmad Memorial Committee Award, etc. His poems have been included in some of the greatest poetic anthologies ever compiled in Urdu, and his writings have appeared in some of the most prestigious literary journals like Insha, Shair, Imkan, Laraib, etc. English translations of his poems have appeared in the Sahitya Akademi’s (India’s national academy for literature) bi-monthly Indian Literature as well as in the Azad Academy Journal.

But there’s more to the gaunt Pathan than Urdu literature and aristocratic lineage. Why Nadeem stands out as a person is because he has dared to be different. He explains, “it struck me that religion was but a compartment in which one is slotted, taking men away from one another and from God as well. From that time, I have been writing my religion as Humanism.” The vivid imagery of his poems apart, it is in his day-to-day life that Nadeem is different from any man one might chance to meet in the course of a usual day. Most men with Nadeem’s idiosyncracies would be termed eccentric. But the poet has disarmingly simple logic for each one of his quirks. “I have never followed the herd. Nor have I been restricted by social mores.” There are three things that Nadeem doesn’t do. Attend funerals, attend marriages and loan out money. “Marriage reception is a place manifesting the worse of hypocrisies. Social mores dictate the bride’s or groom’s father invite friends and enemies alike. Moreover, so much deliberation go over the invitee list – because of the huge costs involved – that one is never sure the invitation was heartfelt.” Those who know Nadeem, know that he is a person who lavishes hospitality on guests – at home or outdoors. Still, he’s one who won’t lend even Rs 100 to anyone. “By lending money, I would lose the freedom of being just friends with the person. I would lose the freedom of reprimanding may take it otherwise.”

Founder LUCKNOW Society was fortunate to meet the legend at his home and discuss the literary achievements of Mr Anwar Nadeem. LUCKNOW Society Salutes, Mr Anwar Nadeem for being the true representative of the Zabaan-e Lucknow and bringing such great literary achievements for the language and the city of Lucknow. We wish him all the very best for his health and wishing a long journey !