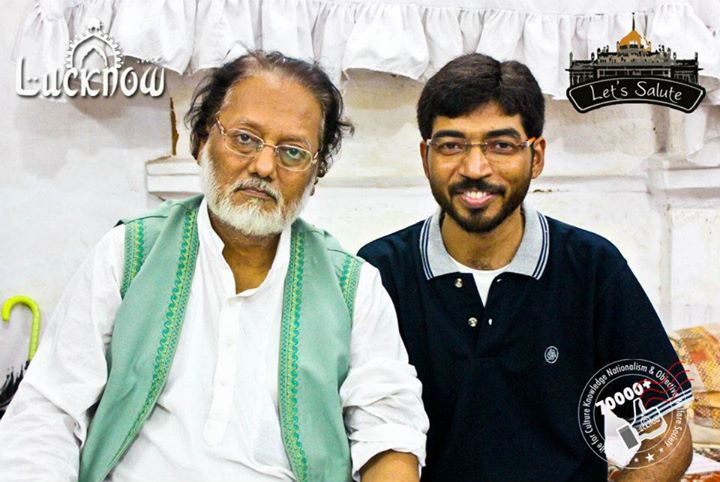 Anwar Jalalpuri is born in the town Jalalpur ( district Ambedkar Nagar ) which is is very famous for the Urdu poets. He achieved many milestones in establishing himself as the true genius of 3 different languages. He is a lecturer in English by profession and an academician & poet by heart !

He has taken up a unique task of translating Shlokas of the Bhagvad Geeta into Urdu verses. Driven by an urge to promote communal & ethnic harmony, this initiative is really outstanding ! He is of the opinion that “Geeta, Upanishads and Quran are nothing less than ‘human heritage’ and they must be preserved at all cost. There is an urgent need to spread the message contained in Geeta among the human beings, irrespective of their religion”. He is also translating 30th para of Quran into Urdu poetry !

Since childhood, he was keen interested in poetry & prose and which gave him a spirit of literature. Early educated in Azamgarh & reached the climax of his literary genius in Aligarh Muslim University ! Lucknow is honoured to be the host city of the genius. He established a junior high school named after Mirza Ghalib in Jalalpur on 1969 which is now an inter college. He is always thankful to his Ustad Malikzada Manzoor Ahmad Sb. Anwar Sb is also world famous for his ‘Nizamat’ ( conducting proceedings of Mushaira ) which is always appealing to the people who love & admire poetry.

Roshnai ke safeer, Khare paniyo ka silsila, Khushbu ki rishtedari, Jaagti ankhein are his collection of Urdu – Hindi poetry. He is also credited with four books on ‘Natiya Shairi’. ‘Apni dharti apne log’ is compilation of his work on prose. He is a regular contributor in many newspapers & magazines. He is also credited with the dialogues & songs of the serial ‘The Great Akbar’ on television.

Founder LUCKNOW Society is privileged to meet him and discuss his marvelous journey. LUCKNOW Society salutes Anwar Jalalpuri for truly being the intellectual & for promoting the Ganga-Jamuni Tehzeeb through his literary works ! We are looking forward for many more milestones from the genius !